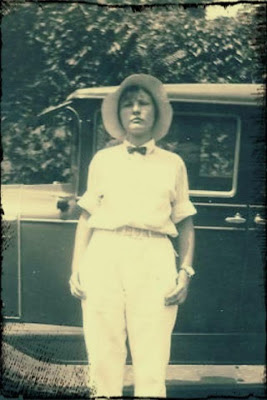 I saw a post on twitter earlier asking who you admired and why.  I occasionally get amused at some of the responses.  The response is often something similar to asking a 5 year old what they want to be when they grow up… There is one person I admire above others.  She never had a drivers license, carried a paddle with her everywhere she went, never traveled out of the country and rarely out of the state, she was known to be stubborn and contrary, but she was one of the wisest, kindest, and loving women I have ever been blessed to know.  Her name was Rose Garland Cole and she was my great grandmother.

She was born on September 26, 1911 to Perry and Ida Townsley Garland.  She had several siblings who were equally talented and amazing, three brothers James, Beckham, and Charles Garland, and one sister Etta Garland Bargo.  If I am correct all of the siblings attended and graduated from college, several of them working in education.  My great grandmother graduated from Union College in 1933.  Amazing, huh?  Most women weren’t even dreaming of college in that era.  I would have loved to have known and befriended her back then, I can only imagine what a feisty and spitfire woman she was.  She started work at a very small school in Cole’s Branch, Kentucky which is in rural Southeastern Kentucky.  She met and eventually married my great grandfather, Delmar Cole.  They had two handsome sons Earl and Freddie, along with a daughter Ruby Lenore who died shortly after birth.   She continued teaching following the birth of her sons, working their modest farm, and being very active in their local church.

She walked to school most mornings, and impacted countless lives in our small town.  One morning while walking to school she was struck by a drunk driver and thrown into a ditch.  It fractured both of her femurs, did significant damage to her knees, and nearly crippled her.  She never gave up.  Her injuries would have been hard to overcome with modern medicine, and she survived this many years ago.  She eventually required bilateral knee replacements, and the constant use of a brace and walker to get around.  Even after the death of my great grandfather, she lived and managed their farm alone.  I can remember as a small child helping her work in the garden, can tomatoes for the cellar, canning jam, or making her famous peanut butter fudge.  I can also remember having a brush or two with her infamous paddle.  I have been approached by many of her former students who told tales of how they encountered the same paddle many years before me.
She taught me about life, sewing, hard work, love, and education.  When I had to be home schooled because I was in a wheelchair, she taught me multiplication tables and made me french fries.  We worked on quilting and made my senior Halloween costume, Alice in Wonderland.  She encouraged me to travel and see the world that she never got to see.
buy vibramycin online nouvita.co.uk/wp-content/languages/new/uk/vibramycin.html no prescription

She loved me unconditionally and never missed an opportunity to remind me of that.
buy acyclovir online nouvita.co.uk/wp-content/languages/new/uk/acyclovir.html no prescription

I am a better person because I knew her.
The summer after my freshman year of college I was staying with her.  She lived in a small white farmhouse just past the Dewitt bridge. The house had no central heating, so we relied on air conditioners and heaters to manage summer and winter. One year, the A/C system broke so I had to find someone that offered Air Conditioning Repair before the house overheated. I was so worried about her, especially in winter. Her house was always so cold. Luckily that summer the A/C was fixed really quickly, but I was still worried about her. The last memory I had of her was telling me goodnight and closing the curtain to her room. My Mamaw Cole was a creature of habit, much like I am now.  She was always up, sitting in her chair at about 6 am, prepared to watch everyone leave for the day.  I got up at about 7am to use to the restroom, I never realized her chair was empty or the erie silence in the house until I sat down.  My heart began to race with panic.  I screamed her name and ran through the house.  My world came to a screeching halt.  I found her eyes wide open, laid halfway off her bed, unable to move or call for help.  She had a massive stroke.  I have always questioned if she tried calling for help and I couldn’t hear her for the air conditioning.  I laid sobbing at her bedside until the ambulance arrived to pick her up.  There wasn’t anything that could be done other than wait on nature to take its course.  On September 11, 2001 while the nation was mourning an incredible loss, I mourned the most incredible loss of my life.
I wish that everyone could have someone like her to admire.  She was incredible in every way and the world was a better place because she lived.  She was my great grandmother, but she was also one of my closest friends and biggest supporter.
buy grifulvin online nouvita.co.uk/wp-content/languages/new/uk/grifulvin.html no prescription

I have spent too long focusing on how I failed her instead of how I could please her.  I hope she is proud of the woman I am, and she knows that every day I am trying to be better than the day before.  Her life is a testament to never giving up and overcoming whatever obstacles may be thrown her way.  She stood out in a crowd and was well ahead of her time. She is my inspiration, and I still miss and think of her daily over 10 years later.
Who do you admire and why?  We should choose those people carefully.  Don’t raise your children to admire star athletes or movie stars.  Teach them the meaning of a real hero, or better yet show them with your own actions and deeds.
XOXO
~Jessica