A Cautionary Tale of Boyfriends, Boy Friends, and Cellphones

I am pretty sure there were more than one expletive blurted from my mouth a few weeks ago…
Along the lines of:

No, I don’t guard my cell phone
No, It did not have a passcode or lock (but it sure does now!)

The Cliff Notes version of the day goes something like this:
I suspected boyfriend had lied to me about something stupid.  I learned my lesson the hard way before, if they lie to you about little stuff, then they will lie to you about much bigger things.
I pulled the typical girl stunt of whining to boy friend about boyfriend, oh and I will admit it wasn’t the first time.

I will also admit, I was pretty sure that boy friend had been crushing on me.  No, I am not full of myself… He had said things casually about “taking me off the market”.  We had been friends for quite a while and rekindled our friendship after I split from my husband.  He is a college grad, great job, good looking, and athletic.  He was totally my type, but he had just crossed over into friend territory.  I should have seen it coming but instead I was blindsided.

I noticed the last few weeks he had been a lil more defensive than usual.
“Why don’t you just dump him?”
“You know you deserve better?”

I think the tension was building because my relationship had lasted longer than he or I had thought.

I totally crushed on boyfriend.  He was everything I imagined I would not want.
Honestly, he wasn’t the first guy you would spot in a bar, but he was the guy you wanted to spend your night there talking to.  He was quiet and much less opinionated than myself.  He wasn’t a doctor, a lawyer, or any other “noble profession, but he was well educated and he loved his job.  There was something about the way he wrapped his arms around me, I felt safe and at peace.  Those were feelings I hadn’t experienced in a long time.  He was adorable, charming, and he loved his dog.  I liked him.

I knew that guys like him were dangerous.  They sneak up on you unexpectedly, and they can easily break your heart.

I have a bad text habit.  I blurt out things completely uncensored.  When I am mad, angry, or upset I have taught myself to do one of two things, either give my phone to a friend or to turn it off and put it away.  The same rules apply for drunk texting…

I chose to give my phone to boy friend.  I threw my phone into his lap and said here take it, don’t let me talk to him today.  I am pretty sure, I didn’t say, “hey, text him in an attempt to ruin my relationship”.

I won’t lie.  I have randomly sent prank texts from my friend’s phones, but I have a hard time believing this was just a prank.  I want to believe the best, but I always fear the worst.

I am in between tears and laughter for several hours.  I was trying so hard to convince myself that boyfriend wasn’t lying, and doing anything to occupy my time.  Boy friends phone was charging, and he was “playing” around on mine.  If I had only known what he was playing…

I know bits and pieces of their conversation.  It was a small fraction of the dozens of texts sent.
It was so ugly that I don’t want to know more.  I’m not sure how two people I cared about could act and react that way.  It turned into a….

He said.
He said.
She said.
They said.
Who said.
What said.

In the end I just wanted to strangle the both of them.

If boy friend really cared, he wouldn’t have done that.  You don’t hurt the people you care for.
Boyfriend didn’t bat an eye believing I had something to do with that, really after two months?  It was heartbreaking to find that he thought so little of me.  From what I gather, you two scuffled like boys in a school yard via text message, and you still couldn’t figure out you weren’t talking to me?

It is another life lesson for me.

Like usual, I am left to deal with the fallout.  Weeks later, I occasionally scratch my head and wonder WTF happened?

For now I have:
Ditched having close guy friends.
Put a passcode on my cellphone.
Regained my general distrust for everyone.

All because my boy friend texted my boyfriend from my cellphone.

Did I mention I hate dating? lol

“I realized in that moment, that no one ever truly loved me,” was almost harder to hear from another friend than it as for me to feel.  I don’t think anyone should feel that way, especially not another kind, intelligent, and beautiful soul.   There is a quote by Kim Culbertson that states, “People think being alone make you lonely, but I don’t think that’s true.  Being surrounded by the wrong people is the loneliest thing in the world.”  The people who care the most, and have the kindest hearts are often the easiest hurt.  It is heart wrenching to know another knows that pain and angst.  The emptiness that comes from questioning if anyone ever loved you, or made you a priority in their life is consuming.

I thought he was being stoic when he looked at me with a stern face, and said my brother had been murdered.  I could barely breath.  I felt like my heart was ripped from my chest.  I convinced myself he was holding it together for me but in reality he felt nothing.  He walked the funeral home floor by my side, never shedding a single tear.  I repeatedly told myself he was being strong for my sake.  I was so detached from reality that I failed to see the truth.  How could you watch someone you love hurt so deeply and show no emotion?  He showed no remorse for my pain, and I grieved alone.  I should have know the words he uttered were coming.

When he said, “Your better off that he is dead,” I wasn’t sure if he was emotionally murdering me.  I knew that very second that he didn’t love me.  How could you say such ugly and hateful words to someone you care for?  I was the mother of his child.  I had sat vigilant at his bedside while he had chemo, checked his lab draws every week, and prayed to God every night for his health.  I cried countless tears and wished it was I who was sick, instead of him.  The seven words that he uttered were the ultimate betrayal.  The one person in the entire world I thought who loved me unconditionally, never really loved me at all.

Relationships are about putting faith and trust in another.  You won’t always get along with them, want to be around them, or hear what they have to say but you care about them enough to deal with the issues.  It is heartbreaking when you realize someone you invested your life in viewed you so heartlessly.

She and I are not unloveable.  We chose to love the wrong people for the wrong reasons.  Maybe we loved them more than we loved ourselves.  I know that eventually the right people will come along at the right time, and they will love us for who we are.  They will appreciate that we are guarded, and they will know all our faults and will love us just the same.  They will not betray our trust.  They will guard our hearts instead of kicking us while we are down.  One day it will happen…

What should you be afraid of? 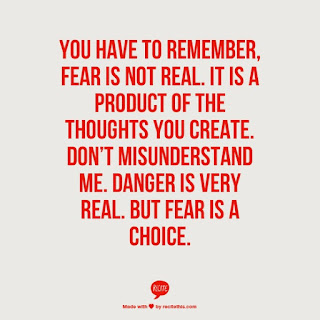 This quote stood out to me because I have problems with fear.  I can be overwhelmingly fearful of the silliest things.  You should fear things are are actually physically dangerous, but why be afraid of the future or how we feel?  I have a fear of trusting people, and it chronically sabotages my relationships with others.  I also have a fear of failure.  I am often afraid of trying new things because I fear of failing at them.  We can choose to not let fear hold us back. 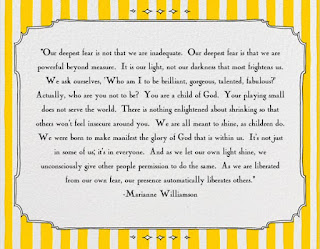